On a routine monitoring patrol in  late January 2021, SCF’s long term oryx monitoring team member Habib Ali, who has been with the project since the start, came across an untagged female oryx with a young calf at foot.  Judging by the horn development, he estimated the new calf was around one month old and he suspected it has not been encountered before. After entering the observation into the oryx data base he took a good photo of the pair to complete the record. The lack of any tags on the female clearly showed she was herself one of the first generation of oryx born in the wild since the oryx re-introduction project has begun, and now she too had a calf of her own.

But there was more, because the photo clearly showed two distinctive white spots on the face mask of the female. A quick check through the project’s photo library of individual oryx  confirmed that the spot pattern exactly matched an oryx we had seen before.  It became clear that the new mother is the first of three calves born on Chad to a founder female from Abu Dhabi and released in January 2017.  That female, wearing a satellite collar marked ‘36’ in red letters (giving her the rather dull identity code name ‘R36 F’) produced  her first calf in March  2018.  Logically, but equally dully, the calf became known as R36-01F.  More interestingly, although nothing unusual was noticed about her colouring as a new-born, by 3 months of age and still accompanying her mother, two  distinctive clean white spots appeared on the face mask of R36-01 as her adult coat colouring developed. Using these spot marks, the team were able to keep track of this wild born female on and off for the first 18 months of her life, but observations stopped in August 2019 – until Habib took his photo of R36-01 with her own first calf on 21 January 2021 – !! 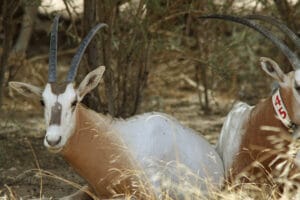 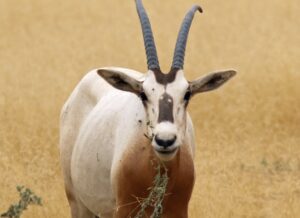 Whilst gratifying in itself, this anecdote points the way to a number of very interesting questions about the oryx and their reintroduction that the project aims to answer.

March 2018, when our spotted female was born, was the middle of a very harsh and hot dry season.  Around 30% of females giving birth in that season experienced calf mortalites.  Not of itself unusual for wild ungulates in poor conditions.  But evidently R36 F successfully raised her first calf through that period. We also know that through the four weeks after R36-01 was born, the new mother and calf were seen (12 times) always in a group of 3, accompanied only by the adult male R23M.   Commonly a new conception occurs as a result of this ‘consortship’ behaviour.  But the records show clearly that in this instance, either R36 F did not conceive at all despite the consistent presence and courtship of R23M, or she aborted any resulting pregnancy at an early stage. That is sure because she did not produce her second calf  until 15 months later, when she formed a consortship with one of the biggest and oldest founder males, B40M.  Based on knowledge of average gestation lengths derived from zoo records, that means the second calf was not conceived until c. September in the late   2018 wet season. But her third calf arrived promptly 8.5 months later, confirming no delay in conception after giving birth in June 2019. 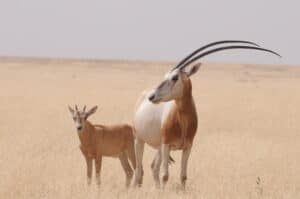 Assessing calf productivity and survival are both key measures of project success.  Thanks to EAD’s extensive collaring of founders, the project has  good preliminary estimates of successful calf production.  But the story of B36 F and her three calves to date illustrate how we are now getting into a position where a deeper understanding of the way season, and year to year variation in conditions may affect this, by analysing across the full set of known individuals over several years.  The natural markings of our 2 spotted oryx have allowed the project to confirm one  wild-born oryx has herself survived to breeding age.  But only because she can be recognised.  In order to obtain an estimate measure of the general rate of wild-born calf survival, the project introduced the wild calf ear tagging program in late 2019.  Since then (and ongoing), the team have tagged 41 wild born oryx calves.  And  R36 F’s third calf, probably a half-brother to R36-01, is among them, now wearing the green ear tag G1355.  Of course to assess the probabilities of survival to breeding age, we will have to keep looking for and recording all sightings of all these oryx  for at least the next 2-3 years as they mature to breeding age.  And there will be complications taking account of variation in  ‘findability’ of individual oryx, as satellite collars drop and ear tags may fall out.  But that is for the back room analysis! In the first instance we hope to record  as many cases of known wild-born oryx themselves with calves at foot or forming consortships as possible.