Knowing the specificities of the Sahelo-Saharan region for many years, SCF brings its expertise to other key players in biodiversity conservation. The West African Giraffe Conservation Project, in collaboration with the Giraffe Conservation Foundation and Niger, is a striking example. Although the giraffe is not one of SCF's focal species, the need to save this species, the determination of the Government of Niger, and the well-known impact of GCF's work have led the organization to engage for the giraffe with these two entities.

This population is found in the southwestern part of the country in the transition zone of the Biosphere Reserve of Niger's Regional Park W (central area of Kouré and dallol Bosso) and in a more northern area, located near Fandou and Dingazi, near Ouallam. These giraffes live in a highly anthropized environment and are increasingly subject to anthropogenic pressures due to the increasing demand for natural resources from local populations.

This led the Nigerien authorities to develop a giraffe conservation strategy through several meetings, including those in October 2015, which approved the translocation of a group of giraffes from the Kouré area to the Gadabedji Wildlife Reserve. SCF set up the ecological monitoring system in Gadabedji Wildlife Area initially with the Pan Sahara Wildlife Survey PSWS project, with a first mission in March 2010, then in a second phase as part of the Niger Wildlife Corridor project with a mission in September 2014. Since then, SCF has supported the Nigerien authorities and in particular the management unit of the Gadabedji reserve in ecological monitoring activities.

The main objective of the project is to secure a future for the last remaining population of West African Giraffes and ensure their long-term survival.

The project includes translocating some giraffe from the barely 600 giraffes living in the area of Kouré, some 80 km Southeast of Niamey, to the Gadabeji Game Reserve, in central Niger.

SCF and GCF collaboration is having a significative impact on giraffe conservation in Niger, with achievements like:

In November 2018, SCF and GCF engaged in the first-ever translocation of West African giraffe to another part of Niger. In what the organization called the "Operation Sahel Giraffe", the eight giraffes were moved 800km away from their original site. Both organizations and their team have worked hard to ensure the better moving conditions possible for the animals, to limit the stress of the journey. Operation Sahel Giraffe was coordinated by GCF with the support of SCF to assist Niger’s Ministry of Environment and the Niger Fauna Corridor Project/UNDP in undertaking the translocation.
WATCH THE FILM

The Gadabedji Reserve has received significant technical and financial support from the Niger fauna corridor project, which is at the origin of the area's designation as a biosphere reserve, a UNESCO label. Good governance, through the strong involvement of local populations and in particular the traditional and administrative authorities of the area, as well as the improvement of management conditions, have been the main reason for awarding the UNESCO MAB label. 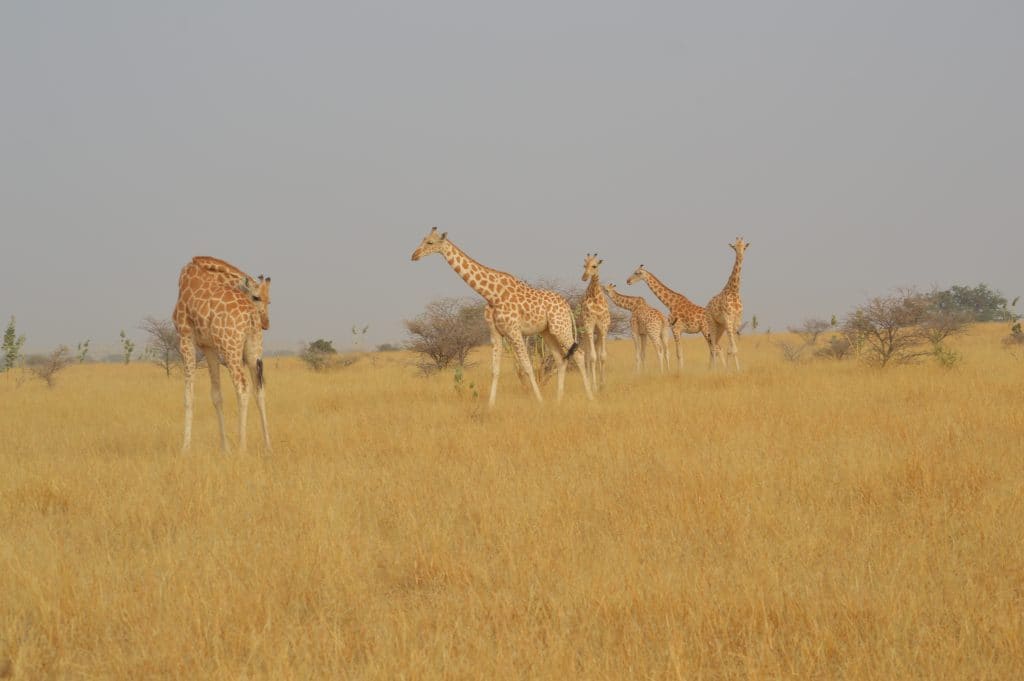 8 West African giraffes (3 males and 5 females) ( Giraffa camelopardalis peralta ) were recently circulated from their area of ​​Kouré 60 km south-east of Niamey, to the Gadabedji Biosphere Reserve more than 800 km away. As part of Niger’s national West African giraffe conservation strategy, the aim of this operation is to provide […] 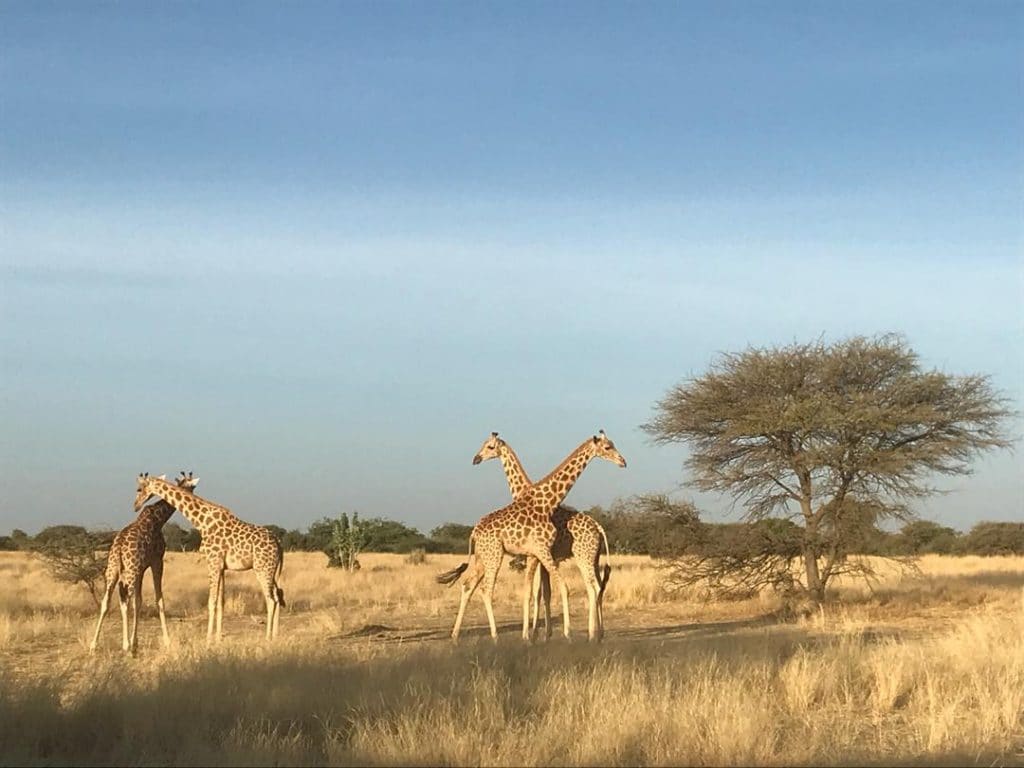 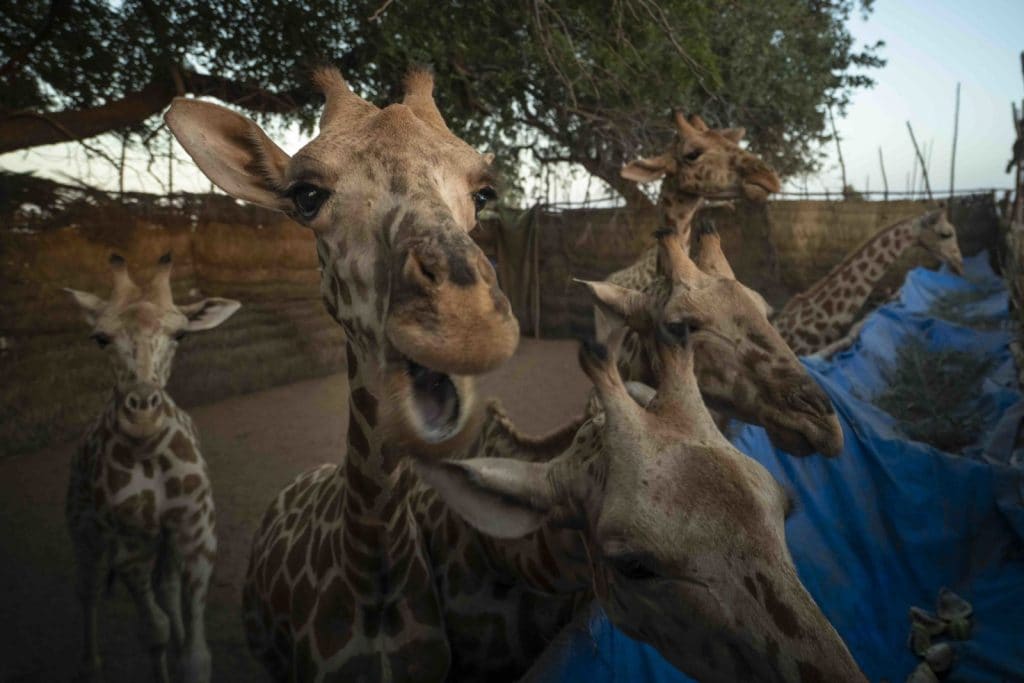 West African giraffe return to Gadabedji after 50 years of absence

December 5, 2018. The Giraffe Conservation Foundation and Sahara Conservation Fund announce the safe reintroduction of eight highly threatened West African giraffe into Gadabedji Biosphere Reserve (recently listed as a Biosphere Reserve by UNESCO). In two trips of 48 hours each, two groups of four giraffe were translocated over 800 kilometres by truck to their new […]