Archive for the
‘Press Releases’ 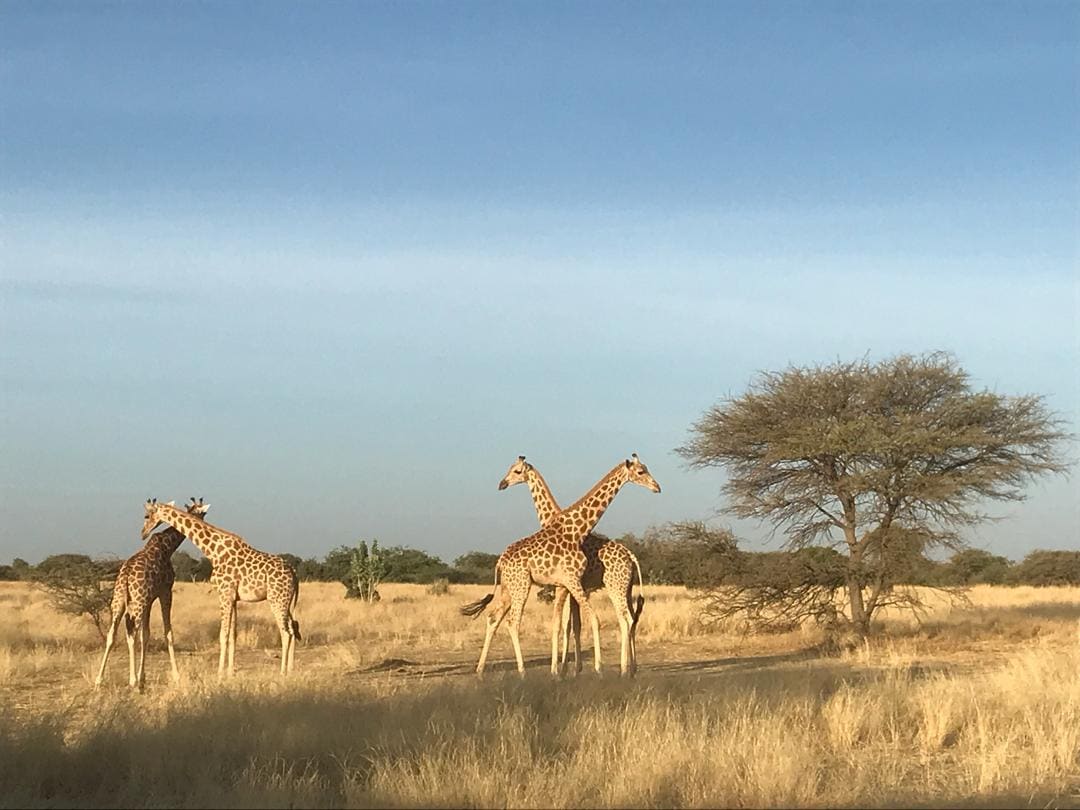 Eight West African Giraffe Travelled Over 800 Kilometres In 48 Hours To Be Safely Re-Introduced To The Gadabedji Biosphere Reserve In Niger, After An Absence Of Almost 50 Years.

The Giraffe Conservation Foundation and Sahara Conservation Fund announce the safe re-introduction of eight highly threatened West African giraffe into Gadabedji Biosphere Reserve (recently listed as a Biosphere Reserve by UNESCO). In two trips of 48 hours each, two groups of four giraffe were translocated over 800 kilometres by truck to their new home. This is the first conservation effort of its kind in Niger, and for West African giraffe.

The world’s last remaining population of West African giraffe (Giraffa camelopardalis peralta), a subspecies of the Northern giraffe (Giraffa camelopardalis), is restricted to the ‘Giraffe Zone’ in the Republic of Niger, an area approximately 60 kilometres south-east of the capital Niamey. Even though the ‘Giraffe Zone’ is not formally protected, it forms part of the W Transboundary Biosphere Reserve, covering more than 1,700 sqkm. These West African giraffe are an isolated population, with the closest population of giraffe being Kordofan giraffe (G. c. antiquorum) that live more than 2,000 kilometres away in northern Cameroon and southern Chad – also a subspecies of the Northern giraffe.

Operation Sahel Giraffe commenced in early November 2018, after a year of meticulous preparation. Eight giraffe were individually captured in the ‘Giraffe Zone’ and transferred to a holding pen (boma), where they were kept for more than three weeks to prepare them for the long journey. The eight giraffe were then transported in two groups of four, an arduous journey for both the giraffe and the team, before their successful release in Gadabedji Biosphere Reserve recently.

Almost 50 years ago, giraffe became locally extinct in the Gadabedji area because of drought and illegal hunting. Since 2013 Niger’s Wildlife Authority, with support from the Niger Fauna Corridor Project/UNDP, has worked diligently towards restoring the region’s wildlife and their habitat. The re-introduction of giraffe will further enrich the reserve’s biodiversity and contribute to increasing community development and support in the region.

“The Government of Niger has undertaken a significant effort to re-introduce giraffe back into the Gadabedji Biosphere Reserve. This is a major giraffe conservation success. The giraffe have not been seen in this area for more than 45 years due to a combination of illegal hunting, habitat loss and climate change. In the days immediately following the release, the giraffe have explored the reserve and its periphery. Local communities and traditional authorities provide updates of giraffe movements to the management unit of the reserve, highlighting their commitment to conserving giraffe in the region.” – says Lt Colonel Ali Laouel Abagana, Coordinator of the Niger Fauna Corridor Project/UNDP.

“Increased conservation efforts using solid science and collaborative partnerships have been key for the re-introduction of West African giraffe in Gadabedji, setting a new benchmark for our efforts across the continent. More than a year of thorough planning has now culminated into Operation Sahel Giraffe: detailed habitat assessments, wildlife surveys, and community outreach and awareness in both their current and new/re-introduced range. Over the last few years, GCF has helped to (re-)introduce giraffe and augment populations in several historical ranges throughout the continent, and in turn helped to better conserve the habitat they live in. Here in Niger, we are one step closer to building a second West African giraffe population.” – says Dr Julian Fennessy, Director of the Giraffe Conservation Foundation.

Throughout the entire continent, giraffe numbers have plummeted in the last three decades – a state of affairs that has been referred to as a ‘silent extinction’. Pressures including habitat loss and fragmentation, civil unrest and illegal hunting have reduced giraffe to less than 100,000 animals in all of Africa. This re-introduction of West African giraffe to their former range in Niger aims to establish a second viable population of the subspecies in support of their conservation in a healthy and well-managed ecosystem.

“We have been involved in the re-wilding of species across the Sahara and Sahel, and Operation Sahel Giraffe builds on these experiences. We are supporting governments to restore the historic large guild of iconic species in healthy ecosystems. This landscape approach to conservation is critical for the long-term sustainability of all species and the habitat on which they rely.” – says Dr Thomas Rabeil, Sahara Conservation Fund.

The team of Giraffe Conservation Foundation and Sahara Conservation Fund has worked collaboratively alongside Niger’s Ministry of Environment and local communities since 2005, supporting the conservation science and management of West African giraffe in Niger to secure their future. Since the late 2000s, Africa’s first-ever National Giraffe Conservation Strategy has guided giraffe conservation efforts in the country. Re-introducing West African giraffe into safe areas within their historical range is a key component of the National Strategy, which is expected to benefit both local communities and wildlife equally. This new founding population in Gadabedji Biosphere Reserve is a critical first step towards the reserve’s development as a flagship wildlife reserve in Niger.

Operation Sahel Giraffe has been a partnership between the Giraffe Conservation Foundation, Sahara Conservation Fund, Niger’s Ministry of Environment, and the Niger Fauna Corridor Project/UNDP.