In mid-January, the Environment Agency Abu Dhabi and the Government of Chad, with implementing partner the Sahara Conservation Fund, released 15 addax into central Chad. These addax were the first of their species to roam this part of Chad in more than 40 years. Shortly after release, the addax split into several groups. First, a solitary female separated from the 14 other animals, circling back to their release site. This addax has moved over 650 km in the weeks since release. By contrast, most (>70%) addax have moved at least 700 km over the same period. 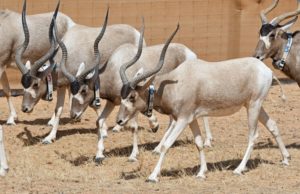 Today, the reintroduced addax are in four different social groups. Eleven animals form the largest group, which has remained fairly settled some 20 km to the southwest and southeast of their release site. This group has also returned to the release site multiple times. The solitary, ‘close-to-home’ female remains alone, as does another solitary female that has roamed much more broadly, covering more than 950 km. Finally, a third pair of females has broken away, traveling west from their release site by roughly 30km. These addax have moved less than 600 km to date. They remain separated from the others.

These movements broadly echo the first release of oryx into the Ouadi Rimé-Ouadi Achim Game Reserve in 2016.  The majority of oryx remained together, but several females split off, moving great distances across the landscape for the first months after release. With daytime temperatures in Chad already into the 40s°C, the team will continue to closely watch the addax to see how they cope.