The Sahara Conservation Fund (SCF) continues to monitor breeding vulture populations in Niger in an effort to learn more about the ecology and threats of these highly threatened birds. Currently, monitoring activities are concentrated in the Gadabeji Biosphere Reserve in the Maradi region and the Koutous Massif in the Zinder region.

In early 2020, it was noticed that Rüppell’s vultures (Gyps rueppelli) in the Koutous Massif – which is not a protected area – seemed to initiate their breeding season well before those nesting in the Gadabeji Biosphere Reserve. This was confirmed during a mission to both areas in late December 2020, during which three Rüppell’s vultures were observed already sitting on eggs in the cliffs of the Koutous Massif, and no vultures at all in the Gadabeji Biosphere Reserve – likely because vultures are only observed in the Reserve during the breeding season. More studies are required in order to explain the phenomenon of early breeding in the Koutous, however it is interesting to note the difference in habitats and nesting sites between the two regions. Rüppell’s vultures are known to nest in cliffs and the tree nesting behavior is mostly considered « rare » by specialists – while it seems that it could be not that rare in the Sahelian region. further studies are still necessary to know more on the ecology and distribution of the Rüppell’s vultures of the Koutous Massif year-round.

Towards the end of February 2021, a second mission allowed the team to observe the first two chicks of the season in the Koutous. These individuals were found among the 13 active Rüppell’s vultures nests that had been previously identified. Rüppell’s vultures share their habitat with Egyptian vultures (Neophron percnopterus), which have also begun to breed – a fact demonstrated by the observation of several incubating pairs. 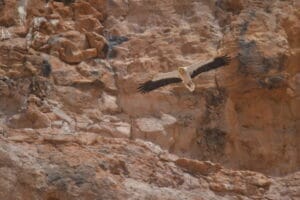 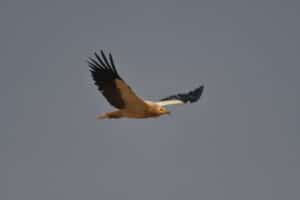 Egyptian vultures in the Koutous Massif

During the same mission, the first active nests of the season in the Gadabeji Biosphere Reserve were also recorded, including two Rüppell’s nests and one white-headed vulture (Trigonoceps occipitalis) nest – all being incubated. Unfortunately, this is a very low number and although it is hoped that more individuals will join the Reserve as the breeding season progresses, it may be an indication of a reduction in numbers for this Critically Endangered vulture population. 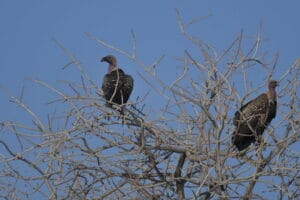 Future visits will allow the team to collect more information on Niger’s breeding population of vultures, hopefully shedding more light on their ecology and their status. Alongside this, efforts are being made to raise awareness of the situation among local communities, water and forestry officials, hunters and other stakeholders. With this in mind, a guide for the conservation of vultures in Niger (in French) was produced by SCF and distributed to the main actors involved in the protection and monitoring of the birds. It is hoped that this will be beneficial to vulture conservation efforts in the long run.