February was the start of a new breeding season for vultures in Niger and time for the local SCF team to start monitor these globally threatened birds of prey.

During a joint mission with the Bulgarian Society for the Protection of Birds (BSPB) in the framework of the Egyptian Vulture New LIFE project, our team spent 20 days in the Koutous mountains of southeast Niger monitoring the nests of Egyptian vultures.  Seven new territories were identified and a total of 11 Egyptian vulture nests recorded. A breeding trio (composed of 2 males and 1 female according to the observations made) was observed on one of the territories – a particularly rare and interesting fact. Numerous cliffs and ledges in the massif offer favourable habitats for Egyptian vultures and many territories remain to be discovered. The population of Egyptian vultures in this area appears to be much larger larger than initially thought.

Rüppell’s vultures have also been observed nesting on the cliffs of the Koutous. These large vultures, which, according to locals, had disappeared from the area for years, seem to prefer the most isolated areas of the massif. A total of 12 nests were counted, including 7 with young chicks that were generally less than 3 weeks old at the time of the visit in late February. 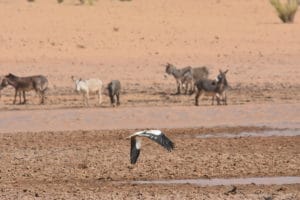 An Egyptian vulture and livestock in the Gadabeji Biosphere Reserve, Niger

At the same time, nests in the Gadabéji Biosphere Reserve in the Maradi region of central Niger is probably a refuge for vultures and was also monitored during the same period. Unlike in the Koutous massif, vultures in this area have so far only been observed during the breeding period. Thus, 14 vultures of 4 different species (8 Rüppell’s vultures, 1 lappet-faced vulture, 4 White-headed vultures and 1 White-backed vulture) were recorded. 10 active treetop nests, mainly in Balanites or Sclerocarya trees, were recorded. In two of them, Rüppell’s vultures were observed incubating.

Upcoming missions will allow us to collect more information on the breeding populations of vultures in Niger so stay tuned!