In December 2020, members of the Oryx Project team spotted three wild dama gazelles – one of the world’s most endangered species – visiting the Oryx Base Camp, almost on a daily basis. Then, in January, two of these individuals began to approach the enclosures where the Project’s three captive dama gazelles – a male, a female and a young female born on August 24, 2020 – are located. The team determined via observations that the wild individuals were females but aimed to find out more by setting up a camera trap near the enclosure. The photos obtained were later shared with the rest of the project team for consultation and confirmation. 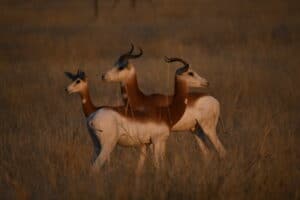 Throughout January and February, the southern transhumance of nomads through the Reserve intensified. Their passage near the Oryx Base Camp disrupted the activity of the wild dama gazelles around the project gazelle enclosure, so much so that they eventually left. Despite this, one individual quickly returned, presumably attracted by the presence of the male in the enclosure. Given its persistence, the team thought it would be a good idea to devise a system that would allow the gazelle to join the group of three. To do so, they constructed an access point in one part of the enclosure, removed an area of fence and placed hay on the ground to further encourage the gazelle.

After roaming around the enclosure for several more days, the wild dama gazelle eventually decided to enter. The team on lookout quickly closed off the access point, opened the inner door the day after so that the group of four could interact, and moved away, aiming to limit the stress of the animals as they mixed. 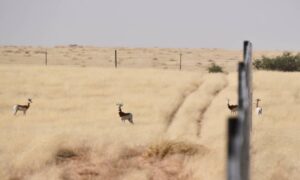 After overcoming a brief period of nervousness, the new gazelle quickly integrated into the group. 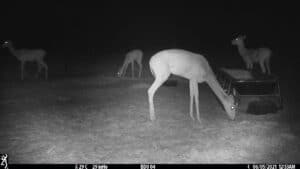 SCF, the field team and the project partners are delighted with this success. But as the coming months are the driest and hottest of the year, maintaining these wild-born dama gazelles in captivity remains a delicate exercise. Everyone involved will therefore pay particular attention to the health of the group. Going forward, the field staff will rely on the experience they have already developed with the group of captive dama to ensure that the individuals are well looked after and are eventually in a position to strengthen the Reserve’s wild population of dama gazelles by successfully reproducing.