Mount Takoulkouzet is located in the Aïr and Ténéré National Nature Reserve (ATNNR). The reserve shelters several emblematic wildlife species including the dama gazelle (Nanger dama), which is one of the most endangered antelopes on the planet.

Since 2017, a project has been funded by the African World Heritage Fund (AWHF) and the NGO Sahara Conservation Fund (SCF) to support efforts in the region to remove the Aïr and Ténéré National Nature Reserve (ATNNR) from the list of World Heritage Sites in danger. The ATNNR has been on the list for more than two decades.

In an effort to conserve the dama gazelle, since 2017, SCF has been working to improve knowledge on the distribution of the dama gazelle’s population in this area through the use of camera traps.

In September 2019, the SCF Niger team carried out a walking mission to Mount Takoulkouzet, accompanied by the conservator and a community worker (guide). This mission took place from August 30 to September 12, 2019, in close collaboration with the Direction de la Conservation de la Faune, de la chasse, des Parcs at Réserves DFC/PR. The main objectives of this field mission were the following:

During this mission, we directly observed 4 dama gazelles and identified 9 individuals through indirect observation. Moreover, we collected dama gazelle feces. 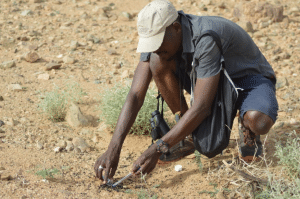 It should also be noted that we identified 11 dorcas gazelles during this walking mission through 5 observations. The average size of each group was 2 individuals.

The search for gold by many individuals and the installation of gold processing sites in the Aïr and Ténéré National Nature Reserve on Mount Takoloukouzet constitute a potential danger for wildlife in general and for the dama gazelle in particular. Although this activity was observed in and around Mount Takoulkouzet, we found no cases of poaching during this mission.