Striving to conserve the last few remaining individuals of a Critically Endangered species is fraught with risks. This is certainly the case for the dama gazelle that may have fewer than 100 individuals remaining in the wild. The most immediate recommendation from the Dama Gazelle (Nanger dama) Conservation Strategy 2019 – 2028, is to “capture any animals remaining in the Manga [Region] to conserve their genetic diversity before the population most likely becomes extinct.”

The Manga sub-population of dama gazelles – located near the border between Chad and Niger – was found to be genetically diverse, possessing genes vital in combatting diseases, providing resilience to changing environments, and possibly the basis for ‘cultural’ and behavioural adaptations that captive-bred animals have lost. 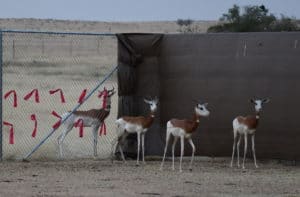 In undertaking this capture operation in January 2020, all parties were aware of how delicate these gazelles are. There was considerable relief that the mission undertaken resulted in the successful capture of three female dama gazelles. A male from the Ouadi Rimé-Ouadi Achim Game Reserve (OROAGR) was added to the group forming an in-situ captive breeding group to ensure that these genes were integrated into the offspring.

Just as the rest of the world entered lockdown due to Covid-19, the temperatures in the reserve started to soar, the group sheltered mostly in the shade of a Balanities thicket in the middle of the pen. Daily checks were made, but not wanting to disturb them too much, these flighty gazelles were difficult to monitor closely.

All signs seemed positive until early April when news was received that one of the females was found dead in the enclosure. Following the advice of vets and animal husbandry experts, the field-team sought to understand what happened. Unable to send a vet to the site, the team sent photos of the remaining individuals, all of whom had lost considerable condition and were very lean. The team provided more watering sites in the pens, and increased the locations of feed pellets, salt licks, and branches for the gazelles to browse upon. Additional camera traps were also set up to provide information on the night-time activities of the gazelles, as they are more active during the cooler hours.

In mid- April, we received the devastating news that a second female had also died. The field-team were able to perform a virtual necropsy on this individual and the photos taken sent to the best available wildlife veterinarians and pathologists. Without the ability to run tests on blood and tissue samples, the main conclusion is that the animals lost significant body condition very quickly once the temperature rapidly increased and the native trees, shrubs and grasses dried out. Death from disease can, at this moment, probably be ruled out. While the team at OROAGR has extensive experience with scimitar-horned oryx, and recently addax, those species have come from captivity and are hardier than dama gazelles. The combination of wild dama gazelles adapting to captivity, and the travel restrictions due to Covid-19 (which didn’t allow more experienced captive managers to travel to Chad during this period—which had been planned) impacted this project negatively.

Everyone involved has learned a considerable amount from this experience, especially the field team, that has been isolated in OROAGR since mid-March. These lessons will help in implementing the other recommendations in the conservation strategy for this species. There is some good news. The remaining two dama gazelles have responded positively to being provisioned and are doing better. And it also looks very much as though the female is pregnant. We hope to report something more positive in a few months.