Building Capacity in a Sahelo-Saharan Protected Area through the POROA

Building Capacity in a Sahelo-Saharan Protected Area through the POROA

The period between January and March of this year has been a busy one for the Ouadi Rimé-Ouadi Achim Project (POROA). One of many notable activities to have taken place is the launch of a training session for the project’s Awareness and Education Unit on behavioral changes related to environmental education. The POROA’s Awareness and Education Unit is responsible for raising awareness among the populations of the Ouadi Rimé-Ouadi Achim Game Reserve, specifically regarding to the use of its natural resources and the preservation of its biodiversity. Once the Reserve’s new management plan has been implemented through the POROA, the unit will be responsible for promoting the plan and its associated regulations to users of the Reserve. The intervention of the Derbianus Conservation NGO team, known for its successful field awareness campaigns on the Derby eland and its conservation in Senegal, will allow the Awareness and Education Unit, its manager and facilitators, to refine the awareness messages disseminated through their Environmental Education Caravans and other field work. The team is represented in the field by Jan Svitalek, a specialist in the relationship between local communities and natural resources in Africa. 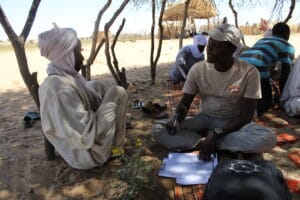 Furthermore, the POROA has spearheaded the training of 40 new guards for the reserve, in close collaboration with the Chadian authorities. The project orchestrated the construction of a training camp near the Reserve and participated in various phases of pre-selection and selection of candidates. The twelve-week training course is being conducted by Mellivora Systems and covers a wide range of topics, including terrain appreciation and knowledge, combat techniques and safety rules. 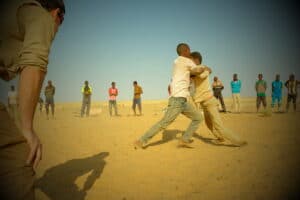 The Reserve extends over 77,950 square kilometers in total, and although guards are already employed to protect it, the scale of this vast protected area makes their task difficult, particularly as they lack basic training and apparatus. Equipping the reserve with new, well-trained and well-resourced guards will therefore be a major step in improving its protection. The forty new guards will eventually be divided into six teams to ensure a permanent presence in the field, with the aim of countering threats such as poaching, bush fires and the degradation of large wadis where illegal logging and conversion to agriculture results in the loss of trees and woody vegetation contributing to desertification.

Finally, consultations and work on the development of the Reserve’s management plan are continuing, with a workshop on the pastoral and anthropological issues in the Reserve held from February 8th to 12th. The workshop allowed for the presentation of 22 new thematic maps of the Reserve in regards to these topics, with the participation of a member of the pastoral platform and a professor from the University of N’djamena. The scale of this task is unprecedented, especially given the immense size of the Reserve, and its success requires considerable dedication from the team and participants. 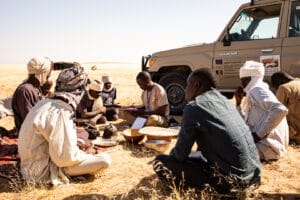 44 days of dedicated field work were necessary and over 17,000 kilometers travelled, to develop the maps. This is all very good news for the project, which continues to see success, despite the ongoing difficulties faced by both the national and international communities in relation to the pandemic.

The project « Support for the development of the Ouadi Rimé-Ouadi Achim Game Reserve and the sustainable management of its biodiversity (POROA) » is part of the support program for the preservation of biodiversity and wildlife and fragile ecosystems of Central Africa (ECOFAC VI) funded by the 11th European Development Fund (EDF). The goal of the project is to preserve the biodiversity of the Ouadi Rimé-Ouadi Achim Game Reserve in an integrated and sustainable way.