In January 2020, a helicopter capture operation was conducted to translocate gazelles from the Manga region to the Ouadi Rimé-Ouadi Achim protected area in central Chad. By bringing back one male among the three captured gazelles, the rescue mission was a success, as a breeding group was created. With the birth of a second dama gazelle, we can hope that the group will progressively grow. 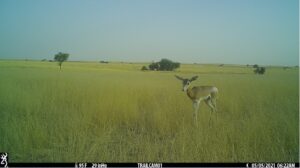 The joint efforts of the various stakeholders were rewarded with the birth of a second baby gazelle, a female. With so few individuals left in their original range, each birth is of vital importance and gives hope in the fight for the conservation of the species.

Since her birth, the little female is in good condition despite the very hot weather. The SCF teams are proud of this birth, proof that the work done is bearing fruit. 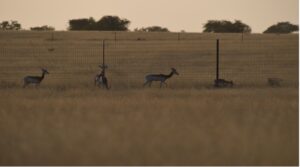 This was a key operation of the 2019-2028 dama gazelles conservation strategy. In order to prevent the extinction of these gazelles, the Chadian government along with the Sahara Conservation Fund (SCF), the IUCN/SSC Antelope Specialist Group, the Segré Foundation, Rewild, and the Royal Zoological Society of Scotland, have partnered to carry out this operation. The current population numbers less than 100 individuals in the wild, indicating an unprecedented urgency for the preservation and transmission of the wild genes of these animals. 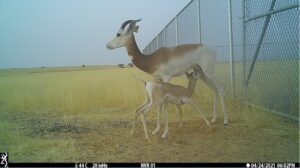 Experts are studying the possibility of translocating dama gazelles from zoos and other parts of the world to expand the group. In collaboration with the SCF team, they are working on the best way to prolong the benefit of this rescue operation, so that the group can flourish and strengthen the existing population.