In the Ouadi Rimé-Ouadi Achim Game Reserve (OROAGR) in Chad, the Sahara Conservation Fund’s (SCF) field staff are continuing to develop the captive group of North African ostriches (Struthio camelus camelus). Wild North African ostriches were once common in the Reserve, but disappeared several decades ago. Individuals from this captive group will be reintroduced once the population is large enough, in accordance with the ambitions of the Oryx Project Phase II.

Thanks to the much-appreciated collaboration with the Chadian wildlife authorities and African Parks Network (APN) / Ennedi Natural and Cultural Reserve  – APN providing ostriches from Zakouma National Park in southern Chad – SCF was able to establish a group of 11 individuals at the site, now one year old and in good shape. In early 2021, similar translocation operations from Zakouma to OROAGR  added another 15 ostriches to the group. 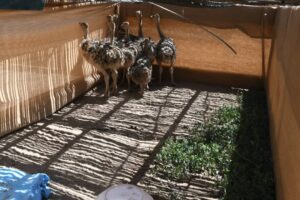 These individuals were aged between one and three weeks old, and are currently being kept separate from the original group, in order to avoid any age-related conflict. 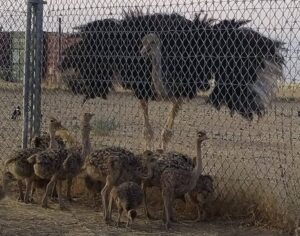 In addition to these operations, SCF has been participating since January in a field study on ostrich predation, conducted by APN. Members of the Oryx Project team joined the APN team to take part in the field work. The study is being carried out in Zakouma National Park – where the ostriches live wild – and involves the inventory and mapping both of the population and of nesting sites.

After being fitted with GPS tags, most of the ostriches from the original captive group at the Base Camp will be released into the Reserve in July or August, while some could be kept for breeding. For now, the birds are receiving the best possible care from the SCF team on site, being offered a balanced diet and all the appropriate vaccinations needed to ensure good health. 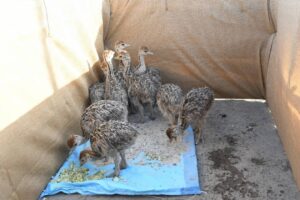 In addition, the team is closely monitoring the behavior of the ostriches on a daily basis, checking that they are feeding and drinking properly, and have everything they need to stay sheltered and warm at night. This is especially important during the cooler months, as cold weather can be dangerous to young ostriches. Moving forward, SCF and all the project team and partners hope that conditions will be met for the release of some ostriches before the end of the year – an exciting step and one which will be a first for this region of Chad.