Animals from Niger Get A Colorful Makeover from Manon Raman

Animals from Niger Get A Colorful Makeover from Manon Raman

“Animals of Niger,” an exhibition of work by the artist Manon Raman, was held on May 22 and 23, 2021 at the Taweydo Gallery in Niamey, Niger. The public was able to admire a selection of paintings portraying various Nigerien species. After the show ended, Manon Raman made the very generous decision to donate 25% of profits from sales of her work to the Sahara Conservation Fund (SCF), turning the art event into a chance to take action in support of conservation of the most endangered Sahelo-Saharian species in Niger. As Henri Matisse put it so aptly, “Painting should serve some other purpose than just painting.”

Manon Raman’s paintings are inspired by her environment. Fascinated by the traditional garments worn by Nigerien women, she incorporates their colors into her artwork. The lively hues are in sharp contrast with the generally more neutral Saharan landscapes, inviting us to look at the subjects with a fresh eye. As though she were telling the story of her life in Niger, Manon Raman’s work portrays her relationship to the people, the environment, and especially the animals present in this part of the world. An encounter between art and nature that made it possible to put several species that are dear to SCF in the spotlight. Although conservation work involves a wide range of sciences and scientists, this exhibit reminds us that it can also draw inspiration from other perspectives. By magnifying her vision of the animals of Niger, the artist provides a certain interpretation of the relationship between humans and nature – one that is brimming with emotion, bursting with color and overflowing with admiration. So it makes perfect sense for SCF to give pride of place to Manon Raman’s endeavor through the interview below. 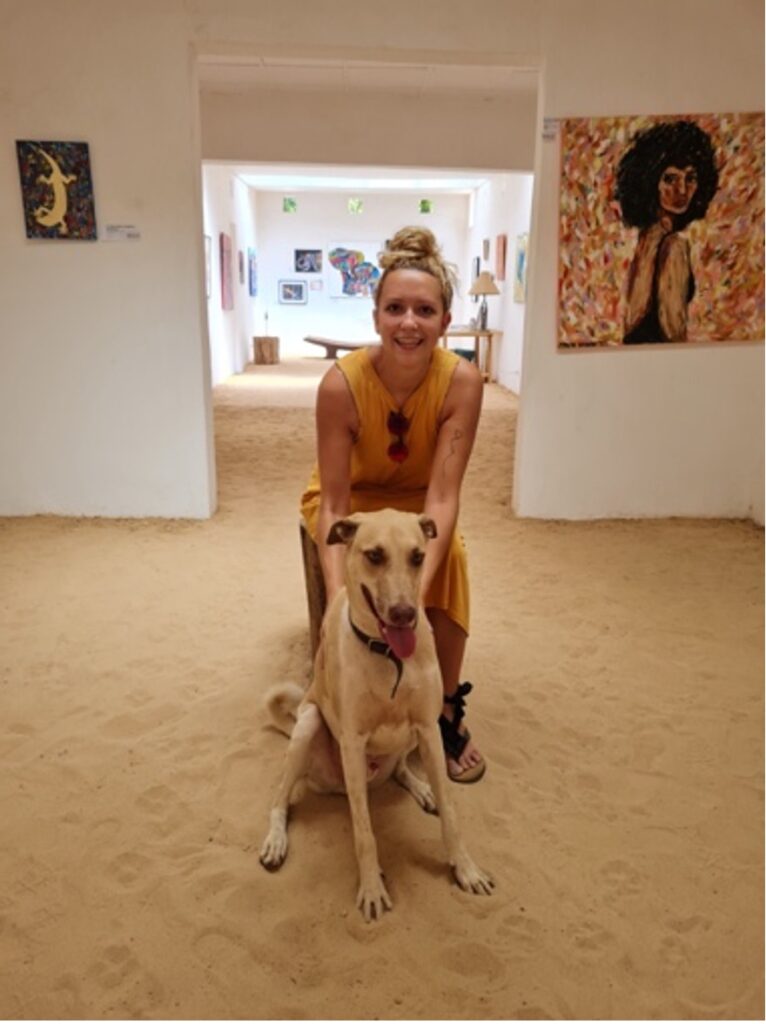 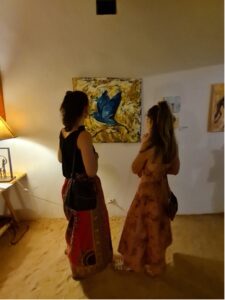 Can you tell us a little bit about your background?

I started out studying to be a director at the Belgian Royal Institute of Theater, Cinema and Sound, but soon realized that I wanted to work more with my hands. So I learned to do make-up for film, and worked in that field for a while. My interest in painting started when I was 21. I wanted to apply to a school that focused on make-up. But to get in you needed a portfolio. I hadn’t any experience with drawing or painting of any sort up until then, so I decided that I had to learn fast. In the end, I didn’t wind up applying to the school, but I did end up with a newfound love for art and creating.

What are the main themes of your work?

I have always been drawn to painting women. I love the shapes of the female body and like to portray them in a colorful and abstract way. Lately I have been experimenting with other themes and subjects, but I think painting women will always have a special place in my heart.

What were your first sources of inspiration when you arrived in Niger?

When I first arrived in Niger, I was so inspired by the colorful clothing and headdresses the women here wear. I brought that color into my work immediately, and I don’t think it has ever gone away since. 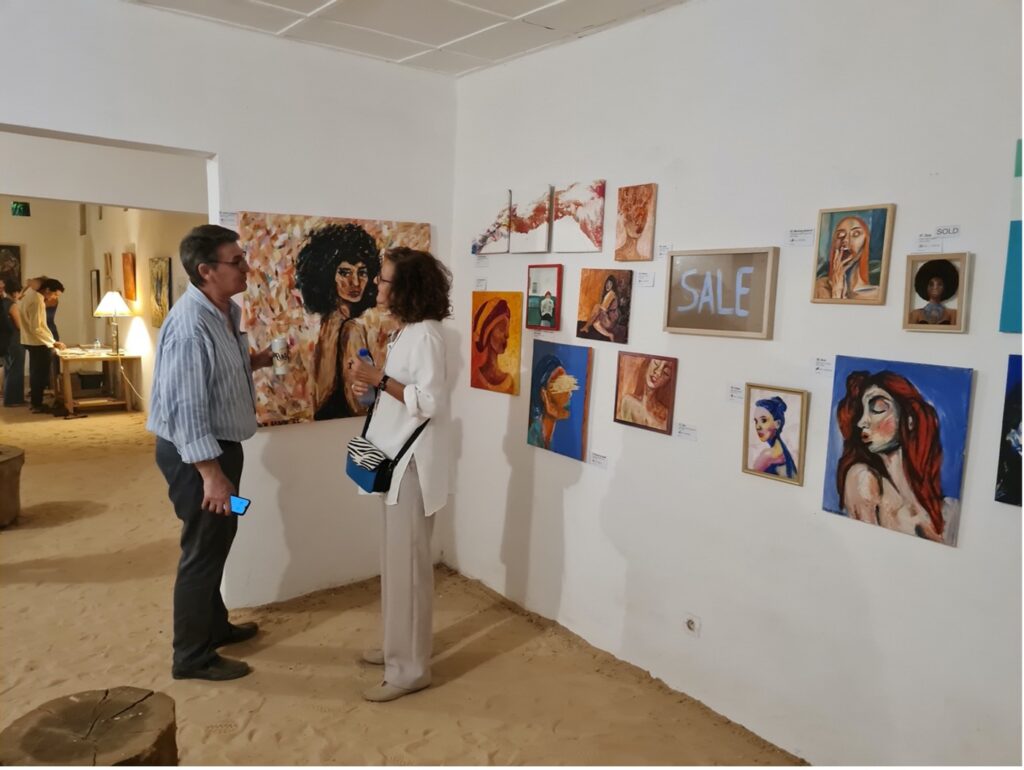 We aren’t used to seeing animals like the dama gazelle in paintings. What made you choose species like them? Is there something special about the species you paint? How do you choose which ones?

After I decided to paint animals for this specific project, I did a lot of research into what animals live in Niger. I had never even heard of a lot of them, so that was definitely interesting. As soon as I found out that the dama gazelle was the national symbol of Niger, I had to include it in this series, of course.

Some of your paintings portray birds we don’t necessarily see every day in Niamey and that are not well-known species. How did you pick them?

During my time in Niamey, I met a bird enthusiast, and he actually sent me a list of all the bird species that he knew were in Niger. I did some research on all of them and then picked the ones that appealed to me the most.

Your paintings portray animals in bright and vivid colors. They contrast with the more neutral, sandy tones of the Sahelo-Saharan landscape. Why did you choose to do that?

The idea of painting animals in bright colors is something that evolved quite naturally. After I had painted my first colorful elephant, I remember thinking, ‘How nice and original,’ and being quite proud of myself. Then a few weeks later, I took a trip to Tanzania, where there were colorful paintings of animals everywhere. Ha-ha!

In my time in Niamey I’ve visited a lot of people’s homes, and I’ve noticed that most of them lack color. So I made it my mission to bring more color into people’s lives, as a contrast with the neutral, sandy tones we can’t seem to escape. 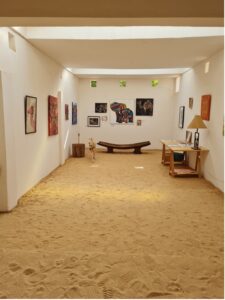 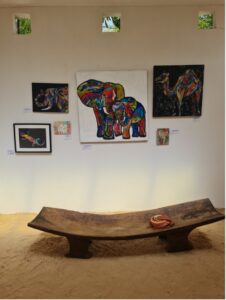 How did your exhibition go? How did you feel about it?

The exhibition was great! The first night we had an opening party, and a lot of people showed up, which made me feel really good. In the three days the show ran, we sold over half of the paintings, which is truly amazing.

I think part of the success is definitely thanks to the beautiful environment. The show was at Taweydo Gallery in Niamey, which (to my knowledge, anyway) is one of the only galleries in Niamey. The owner tries to keep things authentic by providing natural light and keeping a sand floor. It really added to the whole vibe.

This exhibition is a way of turning the page on your experience in Niger. How do you envision the next stage of your career, in New York? Are you planning to keep working on the same themes as during your time in Niger?

I’m not quite sure what the future will bring, but I will definitely keep on painting. My next exhibition will be in Ghent, and it is inspired by my time in Niger, but after that I have nothing planned. I think I will let myself get inspired by New York and just see what happens creatively.

By donating a portion of the sales to SCF, you managed to connect your art to concern for the ecology. Have you ever done anything like that before, and do you think you will strengthen that bond in the future?

When there were floods due to heavy rainfall in Niamey last September, I organized a fundraiser with the Radisson Blu to raise money for people who were affected by the floods. As a Belgian woman in Niger, I feel very privileged, and the inequality often bothers me. Organizing events like that makes me feel like I’m helping, in my own small way. It isn’t going to move mountains, but if everybody helped a little bit, the world would become a better place.

More generally, how does your concern for nature, endangered species, and biodiversity play out in your art and your daily life?

I like to think of myself as an environmentally conscious person, but there is definitely room for improvement. Through this project, I have actually learned a lot about Nigerien wildlife and endangered species, and I hope that other people also learned a bit more about them from the exhibition.

Thank you very much!
For more information and news about Manon Raman, please visit her website: : https://www.manonraman.com/